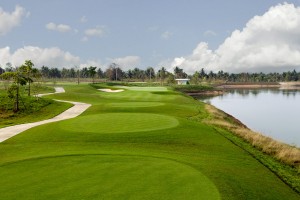 I have recently been given the pleasure of playing the latest golf course in the Siam Country Club range of courses, Siam Waterside. While not officially open to the public, I was allowed to play the course on invitation from the Managing Director, Khun Chai.

What a great feeling it is to be one of the first few to play a new course for the first time, I had been watching the course take shape over the last few years and standing on the first tee, it was great to see the finished product.

The course, apt to its name has some great holes that hug the large lake around the club house, but also has holes where creeks meander through the course. Its design is a little friendlier than its to sister courses, where you don’t have the big tiered greens with large drop off areas that both Plantation and Old course have.

Holes 1 and 2 have water in play off to the right hand side, then the courses heads away for the water and uses bunkers to hinder your progress. 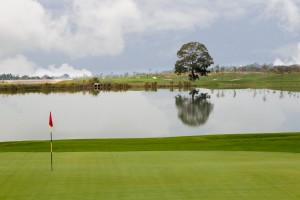 9th Green looking back towards the tee (tree in background)

The 17th hole has water along the full length of the hole and for your second (or third) shot you need to hit across the lake to the green, protected by bunkers on the left.
Hole 18 is a long par 5, with water again the full length of the hole.If you play it as a three shotter then there isn’t many problems, going for it in 2, requires you to hug the waterline for your drive, then carry a fairway bunker to get to the large putting surface.

The greens at Waterside are quite large but don’t feature the large tiered complexes that Plantation and Old Course share.The course designers were given the directive to make it a playable course for the public, yet from the back tees to be able to host world class tournaments. If going by Watersides sister courses, it wont be long til we see the LPGA stars playing here.

In my opinion, when the initial enthusiasm dies down on playing a new course, I can see this course getting as many rounds as Plantation course, for me, I would prefer the Waterside course.
It will be interesting to see what the Siam members prefer to play, as they will have a choice of 3 world class courses, if you get used to playing top courses all the time, its going to be hard to chose,but you will see me playing my Titleist around Waterside.

© by Golfasian - The Asian Golf Experts