Last week I spent the entire week driving around and looking at golf course conditions as my friends are coming to play soon and wanted to know where they should be playing golf in Pattaya.

For me, the top 4 courses in Pattaya are The three Siam Country club courses,  Siam Old Course, Siam Waterside and Siam Plantation and Laem Chabang, are always in tip top shape. What did surprise me is how quickly you can turn the condition of a golf course around in a relatively small time.

This course was recently taken over by a new owner and now have appointed a new general manager, Khun Nathawat who was previously pulling the reigns at Thana City Golf club in Bangkok.

There has been many refurbishments around the greens, tees and bunkers and the course is looking in tip condition. I wish I took my clubs to play !! The popular Thai golf designer, Khun Ope from Golf East ( Banyan Golf Course, Nikanti Country Club,  Siam Waterside) was brought in to reshape some bunkers and make some changes to drainage and having his level of experience will pay big dividends over the new few years as the course goes from strenght to strenght.

The fairways were in the best condition I have ever seen this course in the 10 years I have been playing golf in Pattaya.

I believe they will be lifting the old compulsory carts rule from 1st October which will make the walking golfers happy.

I would recommend if you haven’t played Phoenix for a while you should get back up there and have a round. I saw some drawings at the club and believe they are going to undertake some major club renovations that will take in accommodation on site as well !

Next stop in my whirl wind tour of southern Pattaya golf courses was St Andrews 2000, Green Valley and Silky Oaks. We were shown around by John who has the St Andrews Golf Centre, where they have the  golf simulators so you can iron out your game over a cold beverage as well as great western food after your round. (Try the killer hotdogs !!)

We started off with Green Valley and again it seems to be the season for growing grass, as this course was in great condition as well, good fairways coverage and most greens running about 9 on the stimpmeter, which is a good speed for a public course.

The driving range is up and running  and has a great chipping and putting green nearby.

We moved over to St Andrews 2000 and they have made a lot of changes here with taking many trees out to allow a better airflow around the greens and to keep the shadows of the green which were causing problems previously with patchy greens.

As we drove around the par 6s are looking a devilish as ever, as when I suggested that they need to remove the trees in the middle of the second par 6, John said we should leave them alone, as they catch plenty of people ( yeah me)

As we moved onto Silky Oaks, we started with probably the shortest par 3 in Pattaya at 87 yards, I could probably throw it on from that tee. But when you look at the shot you have to hit, its a down hill shot to a wide and skinny green with bunker to trap the shot that is short or right 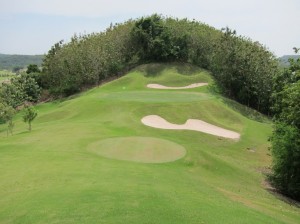 There is plans to re route a few holes and one of them is one of my favourites the par 5 down and around the lake.

For the biggest hitters it was a good, two on, opportunity if you were happy to take on the water, but now the plans are to bring the tee forwards and make it a shorter par 4. I think it’s a loss, but someone knows better ?

Ok lets wind the clock back 12 years and Emerald had a temporary club house  and was a round of golf on the way to Ban Chang for drinks.

After my visit on Wednesday, it’s a course that I will bring my friends as the conditions are great, green speed up there at 9, and the layout that Nick Faldo designed back in the day, still continues to test your game on every shot.

A  little bird told me that the golf course is looking for a new owner and with 1200 rai of land and plans drawn up from Sir Nick Faldo for another 18 holes, it could be a good opportunity for a passionate golfer to live out there dream and own their own golf course (More details contact me on markpenfold21@hotmail.com)

© by Golfasian - The Asian Golf Experts